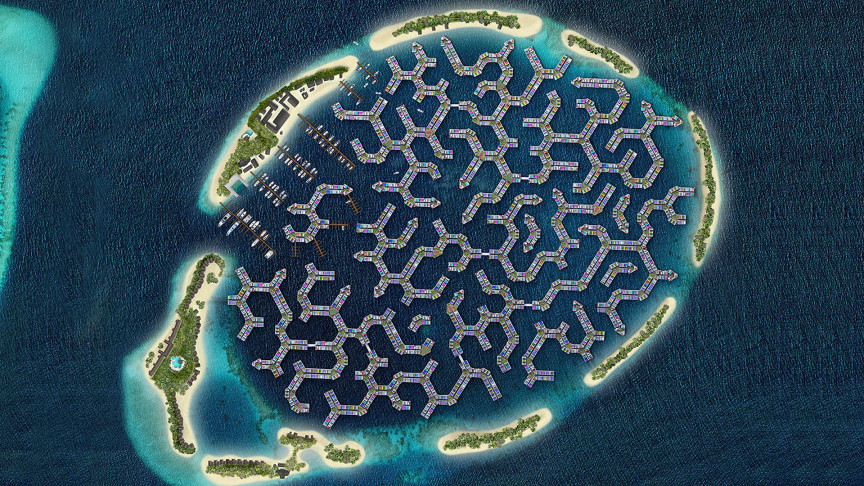 Instead of climate refugees, Maldivians can become climate innovators by using engineering to stay above the surface.

In the face of the reality of climate change, Maldives is getting the world's first truly floating island city -- appropriately called, Maldives Floating City (MFC), according to a press release.

The Government of the Maldives, an island republic in the northern Indian ocean that has "the lowest terrain of any country in the world" per NASA, revealed the plans for the MFC last month. This is crucial news for the Maldives since it'll enable the country to mitigate the effects of climate change and rising sea levels.

When the grand picture is considered, things are not looking up for the country: Some studies predict such low-lying islands could become uninhabitable by 2050 and it is for sure that the Maldives will be some of the first to disappear below the rising sea level.

Maldives Floating City, designed by the Netherlands-based Dutch Docklands, will be built in a lagoon in a series of hexagonal maze rows that are aimed to have the look of coral.

It will offer thousands of waterfront residences, starting at $250,000 for about 92.9 square meters (1,000 square feet), floating beside a functional gridwork.

The floating rows system will be attached to a ring of islands that form the base and to a stabilizing breaker wall. With some cool engineering, island barriers around the lagoon will act as breakers below the MFC while the city floats up top. "This ingenious configuration lessens the impact of lagoon waves while stabilizing the structures and complexes on the surface", explains the press release.